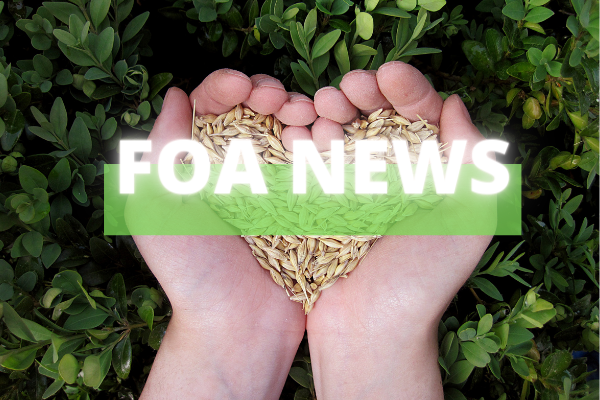 The FAO-INBAR strategic alliance is particularly important & meaningful as “Africa & South Asia are the two regions that face the most serious problem of food security, while on the other hand they have some of the most abundant bamboo & rattan resources in the world,” said Professor JIANG Zehui, Co-Chair of INBAR’s Board of Trustees. INBAR will “spare no effort” to promote ways to “create a better world for all” in partnership with FAO, she added.

The Memorandum of Understanding signed by FAO & INBAR was designed in a highly participatory manner, illustrating both organization’s commitment & providing promising support for sustainable development, said INBAR Director-General Ali Mchumo. The partnership will allow efforts to “reap more benefits” for the world’s most vulnerable people, he said.

The new partnership has come together quickly amid the urgency of the COVID-19 pandemic. A task force comprising some 30 experts from FAO & INBAR has already held its first meeting to operationalize a work plan through 2022, including joint proposals for resource mobilization, coordinated implementation of projects, development of knowledge products & the exchange of data & information.

With over 194 member states & working in over 130 countries worldwide, FAO is the specialized agency of the United Nations that leads international efforts to defeat hunger. FAO has a long history of fostering sustainable agricultural development & the sustainable use of biodiversity for food & agriculture. FAO is also supporting countries to both mitigate & adapt to the effects of climate change through a wide range of research-based & practical programmes & projects, as an integral part of the 2030 agenda & the Sustainable Development Goals.

INBAR, an intergovernmental organization with 47 members set up in 1997, has played an active role in helping countries pursue the sustainable use of rattan & bamboo with an eye to a range of Sustainable Development Goals, including ending poverty, providing affordable energy & housing for all, addressing climate change, making efficient use of natural resources & protecting terrestrial ecosystems. It has been a strong advocate of South-South Cooperation, INBAR has headquarters in China, the world’s largest bamboo producer, with regional offices in Cameroon, Ecuador, Ethiopia, Ghana & India.

Bamboo & rattan grow locally to some of the world’s poorest communities in the tropics & subtropics & their special characteristics fit well into green development plans, able to provide a fast-renewing alternative to timber fuel as well as cutting-edge building materials to replace emissions-intensive materials such as steel, plastics & concrete. New uses are projected to include wind turbine blades & bullet-train fuselages.

Bamboo, technically a grass whose root systems can help bind soils to fight desertification, can grow up to a meter in a day, offering powerful carbon sequestration opportunities both while alive & while converted into products for human use. Moreover, it can grow on marginal soils so no need not compete with productive croplands.

Rattan, a member of the palm family, grows like a rope & is widely used to make woven items, furniture, baskets, & birdcages, & is being trialed as the basis for bone replacement material. Like bamboo, it grows quickly & grows back after harvesting, creating a fast-acting source of sustainable income.

Combined, the two plants support a $60 billion global industry, according to INBAR, which estimates that exports amounted to $1.7 billion in 2017.

There are 1 642 known bamboo species & about 600 species of rattan. Beyond their own biodiversity, the plants play a key role in ecosystems, & many of the world’s most iconic & endangered species – such as the giant panda, mountain gorilla & greater bamboo lemur, as well as a sizable share of bird species in the Amazon- depend on them for survival, highlighting their range of relevance in terms of conserving the world’s biodiversity.

Bamboo’s multifunctional nature is showcased in the 1,000-year-old farming system in Damyang, Korea, which this year won recognition as a Globally Important Agricultural Heritage System, where bamboo stands impede soil erosion, moderate temperatures for villages & the tea & mushrooms they grow.