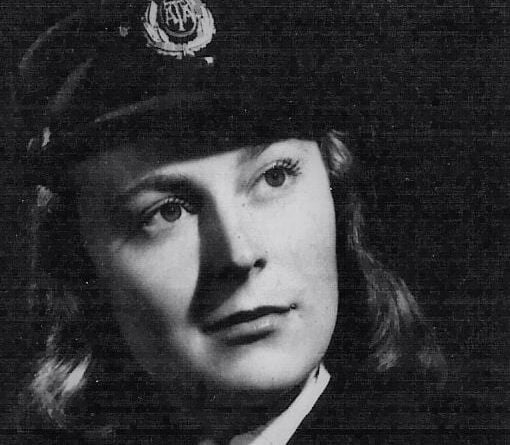 Betty Ann Lussier was a fiercely independent, hardworking, adventurous woman with a craving for excitement and a compassion for humanitarian issues.

She grew up on a dairy farm and learned to fly a plane at the young age of 16. When she was 20, she boarded a ship to England to fight the Nazis. She became a successful counterintelligence agent with the Office of Strategic Services (OSS) and married one of the wealthiest men in Spain. She socialized with Ernest Hemingway and Ava Gardner and later worked for the United Nations. She also authored several books.

Betty Ann was born in December, 1921 in Alberta, Canada. Her father, Emile John Lussier, was a decorated World War I fighter pilot with the Royal Air Force who earned the British Distinguished Flying Cross as a teenager. Betty’s mom, Vera Fleming, was a homemaker and farmer.

When Betty was four their family purchased Huntingfield Farm, a dairy farm on the Chesapeake Bay on Maryland’s Eastern Shore. The farm initially had no electricity, telephone or indoor plumbing. Betty assisted with the chores which began at 4:30 a.m. by hand-milking the cows. The land once used by Indians for tribal gatherings now hosted a girl’s camp during the summer months at which Betty and her sister’s worked as counselors.

Betty inherited her father’s love of flying and learned to pilot a small three-seater Piper Cub plane. She enrolled at the University of Maryland (UMD) where she joined the Civilian Pilot Training Program (CPTP); although this was met with reluctance at first by the program’s coordinators, Betty being female. The CPTP was a government program designed to build a reliable supply of civilian pilots for national defense purposes. Astronaut/Senator John Glenn trained under the CPTP as did 435,000 others including many women and African-Americans.

Betty dropped out of college to contribute to the war effort by working the nightshift at a nearby plant building B-26 bombers. This freed her days to accumulate flying hours. Shortly after beginning work at the plant Betty learned of a new British initiative. They would grant free passage to England to any British citizen living in America in exchange for engaging in war service upon arrival in Britain. Betty was a dual citizen and wasted no time in hitching a free ride to England, which had been her goal since enrolling at UMD.

At 20 years old Betty was on her way to fight in World War II, all on her own devices.

Betty arrived in England in October, 1942 and was assigned to the British Air Transport Auxiliary (ATA), tasked with flying planes from factories to squadrons, transporting planes in need of repairs, and flying groups of male pilots to their combat stations in the United Kingdom. The ATA also occasionally piloted VIPs around the country. These contributions in turn freed up male pilots for combat duties.

The ATA was comprised of civilian men and women from 22 countries including 25 from the United States. In total the ATA delivered over 300,000 aircraft during the war. The women of the ATA were the first women to officially transport planes during wartime. In addition, they were paid equal to their male counterparts. Advancement and promotions were granted on merit, not gender and the workload was divided equally between male and female pilots.

Equal opportunity ended though on D-Day. Only male pilots were authorized to fly into combat zones in Europe. Betty was furious, later stating she would have died for the opportunity to fly in combat. She turned in her resignation which clearly stated she would have preferred to remain with the ATA and fly Spitfires.

Betty’s godfather, Sir William Stephenson, was head of the British Security Coordination in New York City and a personal friend of the head of the OSS, General Donovan. A month after she resigned from the ATA Betty became a member of the OSS.

In May 1943 Betty joined the counterintelligence, X-2 branch of the OSS. She was sent north of London to join the first group of 5 men and 5 women to be trained by the British in cryptography. The British had obtained a German cipher machine, Enigma, and were reading all of the German’s field communications. The resulting intelligence was referred to as ULTRA. This intelligence was handled by British subjects designated as Special Liaison Units (SLU). An SLU would receive the decoded message and then disguise the source of the information. The SLU would then deliver the intelligence to various U.S. Army headquarters. Although Betty’s official role at X-2 was in a secretarial capacity she designated herself an SLU, one of only 28 American SLUs in the European theater of operations.

After three months of training Betty was sent on her first assignment to Algeria. She began her days working with the British pulling ULTRA data and selecting what might be useful for the U.S. Seventh Army. She would then disguise and deliver the intelligence which was used in planning sabotage missions and other operations. The Germans fully believed that their codes were unbreakable and therefore spoke freely, providing troves of useful intelligence.

Betty accompanied the Allied troops as they moved from Algiers to Sicily. But she found herself left behind once again when her X-2 unit left for southern France without her; women were not allowed on the front lines. Betty was determined to see action and she convinced an Army Air Corps pilot that she was a radio technician needed at the front and he flew her there without question where she resumed her duties as SLU to the Seventh Army.

Love on the French Riviera

Betty was then sent to Cannes, France on the French Riviera where she tracked down Nazi spies. They were detained for questioning and then either turned over to the French or forced to become double agents, transmitting misinformation to the enemy. In September alone she and her X-2 colleagues uncovered 27 spies. By the following month they were running several double agents.

Next her X-2 unit moved to Perpignan, France, near the Spanish border. It was here that Betty got acquainted with her new Commanding Officer, Ricardo Sicre, a captain in the U.S. Army. Ricardo was from Catalonia, Spain and a former volunteer in the Spanish Republican Army. Just a few years prior he had procured a job on a ship bound for the United States. He jumped overboard in the New York harbor to evade immigration as he held no visa to enter the country. In New York he joined the Coordinator of Information, the precursor to the OSS, where he penetrated the Spanish embassy in Washington, D.C. having seduced the secretaries. His comrades nicknamed him the “wild Catalan.”

Now Ricardo was a counterintelligence agent with the OSS deeply involved in a top secret operation. He had the burdensome task of composing daily reports on the progress of the mission, made even more challenging as English was not his first language. Betty offered her assistance and the two began a secret romance.

Ricardo was instrumental in busting a significant spy-ring. French counterintelligence had picked up a German Army officer, Max, whom they interrogated with no results. The French passed him off to the British who eventually turned him over to X-2. Ricardo approached Max with compassion and was able to coax him into sharing his post-war plans. Max wanted to go to Hollywood and pursue a career as a comedian, like Charlie Chaplin. Ricardo said he could assist Max in his pursuits if he were to come clean about his real reason for being in France. Max readily admitted that he was the paymaster for a network of 35 spies who operated for the Nazis. Max was in France to pay the spies in cash. Foolishly, Max had written down all 35 names and addresses of the spies on one single piece of paper which he gladly handed over to X-2 who then arrested every single one of them. They turned eight into double agents. Max never made it to Hollywood nor did he ever show any remorse for betraying the 35 spies.

Life after the War

Betty resigned from the OSS on October 22, 1945, married Ricardo and settled in Madrid, Spain where they raised four sons. Ricardo was awarded the Bronze Star and received American citizenship. He founded a successful import-export business with some wartime friends and became one of the wealthiest men in Spain. The couple quickly ascended to high-society and spent time on their yacht socializing with Ernest Hemingway, Ava Gardner, Grace Kelly, Prince Rainier, Adlai Stevenson and Spanish intellectuals and bullfighters.

Betty left Ricardo however when she discovered he had been attending bullfights with Ava Gardner. She moved to Morocco where she purchased 1,000 acres of farmland, but was expelled from the country for promoting worker’s rights. She returned briefly to Madrid and moved temporarily to Switzerland with Ricardo. She finished her undergraduate degree from UMD while living in Europe then moved to New York to attend Columbia University for a master’s. Betty began a second career pursuing humanitarian causes. She and Ricardo divorced but remained close friends and neither ever remarried.

In March 2008 British Prime Minister Gordon Brown presented medals to all surviving ATA women pilots and ground crew for their courageous service and bravery during WWII. For her work with the OSS she was awarded the Theatre Commander Certification of Merit for “exceptional devotion to duty; her character, intelligence, and ability were a primary factor in the success achieved by units to which she was attached.”

At the age of 86 Betty still took to the sky piloting her plane. She died in 2017 at her home on the Chesapeake Bay.

If you’re interested in learning more about the life of Betty Ann Lussier, or background on the OSS missions discussed in this article, here are some sources to get you started: