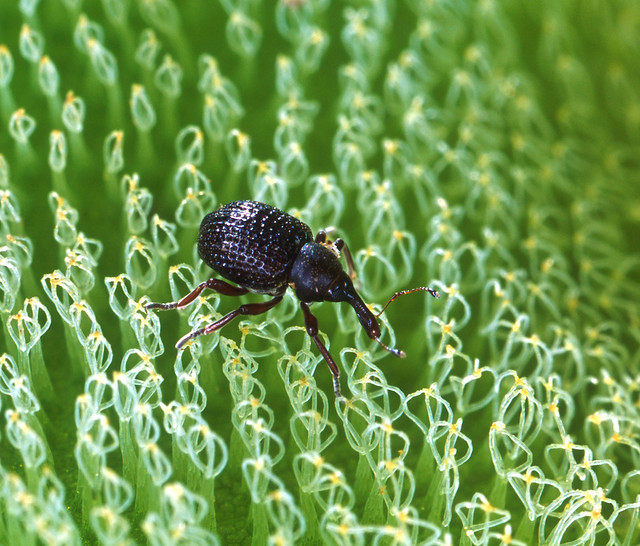 Tipping explains that non-native weeds become “invasive” when natural enemies, or insects, are no longer in the local habitat. IPRL researchers scour the world to find coevolved natural enemies of the target weed. They then release those enemies into infested areas to suppress the invasive species. The trick is to make sure the new insects do not become invaders, too. This is accomplished through years of testing in quarantine to make sure the insects only attack the target weed.

“Most insects can only sustain themselves on a few, closely related plants,” Tipping said. “These are the specialists we seek because their diets are predictable and stable. Insects with broad diets are never chosen and would never get an permit from USDA’s Animal and Plant Health Inspection Service for release.”

This classical biological control method is the most effective way to bring about the recovery of native habitats, Tipping said. It’s like finding Kryptonite for each invasive species.

For example, in the course of fighting the air potato vine, IPRL research scientists Min Rayamajhi and Bob Pemberton discovered beetles in Nepal that fed and reproduced exclusively on air potato foliage. They studied the beetles for 5 years in IPRL’s quarantine facility before getting permission to release millions of the beetles into air potato-infested areas. In just 7 years, the air potato beetle devoured up to 70 percent of air potato foliage, which led to a 90 percent reduction of vine cover on native plant communities and biomass by 95 percent.

IPRL staff have fought invasive species for over 60 years, beginning with aquatic weeds in streams and canals that impeded water flow for drainage and irrigation. Since then, they have developed and introduced 26 biological control agents that have completely or substantially controlled 10 targeted weeds, including the air potato vine, giant salvinia, melaleuca, and waterhyacinth.

In terms of effectiveness, numbers tell the tale. Tipping said that developing a new pesticide costs more than $286 million, takes 11-12 years to develop, always produces collateral damage and weed resistance, requires large markets, and returns $3 to $6.50 for every $1 invested. Conversely, biological control usually costs about $5 million per weed, takes as few as 5 years to develop, is specific to the targeted weed, is environmentally friendly, and returns $16 -$35 for every $1 invested.