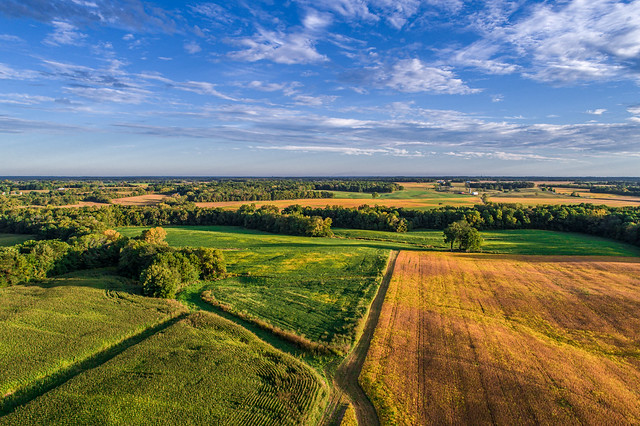 Ever wonder where Ohio’s nickname came from? Ohio is commonly referred to as “The Buckeye State” due to the prevalence of the Ohio Buckeye, named Ohio’s official state tree in the 1950s. According to USDA’s Natural Resources Conservation Service (NRCS), the name refers to the tree’s nuts and their resemblance to the eye of a deer. But don’t eat these nuts! NRCS warns that all parts of the Ohio Buckeye are toxic to humans and livestock. Luckily there are many other things we can eat that come out of this great state.

Ohio has a rich farming history. Many of Ohio’s settlers were farmers, growing corn, beans, squash, and wheat, and raising livestock such as cattle, sheep, and pigs. Today, farming remains an important part of Ohio’s economy. The Buckeye State continues to be a large producer of corn, soybeans, winter wheat, milk, hogs, and poultry – to name a few.

According to the 2017 Census of Agriculture, Ohio had 77,805 farms (ranking fifth nationally) on 13,965,295 acres of farm land. Ohio ranked 16th in total sales with $9 billion. The Buckeye State also ranked 13th in crop sales with just under $5.5 billion, and 19th nationally in livestock sales with just under $4 billion. The average Ohio farm was 179 acres and produced over $120,000 in total sales.

Not to be outdone, the livestock industry is also well represented in the state. Ohio farmers had hog sales of over $1.01 billion, ranking Ohio ninth nationally in hog sales. Milk sales were just below that number at over $1 billion, placing Ohio 11th nationally in that category. In the poultry industry, Ohio continues to rank second nationally with a layer inventory of over 28 million. The impact this industry has on Ohio agriculture is especially noticeable at the local level. Ohio’s Mercer and Darke counties ranked sixth and eighth nationally among top layer counties in the United States.

On the demographics side, the average age of Ohio producers is 55.8 years, which is below the national average of 57.5 years. Over 14,900 Ohio producers are under the age of 35 and over 33,000 producers have been working on a farming operation for 10 year or less. There are over 43,000 female farmers in Ohio.

These are just some of the exciting facts about Ohio agriculture. For more information about agriculture in The Buckeye State, visit www.nass.usda.gov/Publications/AgCensus/2017/Full_Report/Census_by_State/Ohio/ or email me at [email protected].

The Exposing of Project AZORIAN | CIA