Twenty years ago, in 1998, suicide bombers drove their pick-up trucks loaded with explosives to the American Embassies in two East African cities. At 10:30 am (local time) the first truck, loaded with 2,000 pounds of TNT, forced its way to the back entrance of the embassy in the busy downtown of Nairobi, Kenya.

The deadly cargo would have exploded in the US Embassy basement had it not been for the Kenyan security guards.

Despite a grenade and firearms attack, the Kenyan guards and the US Marines prevented access to the building. The terrorist then detonated the bomb at the open gate to the embassy.

The explosion reduced much of the interior of the embassy to rubble. The secondary fragmentation from flying glass, internal concrete block walls, furniture, and fixtures caused most of the embassy casualties.

The majority of the Kenyan casualties resulted from the collapse of adjacent buildings located within a two to three block radius. The explosion was heard throughout the city center and the reverberations were felt in most parts of Nairobi.

Minutes later, a second truck bomb exploded outside of the US Embassy in Dar es Salaam, Tanzania, causing extensive damage to the building.

In total, the two bombings killed 224 people, including 12 Americans. Many thousands more were injured, most of whom were local citizens of the two African countries. The attacks had been planned years in advance.

The Rise of Usama Bin Ladin and al-Qa’ida

The US Embassy bombings in East Africa introduced the American public to Usama Bin Ladin and al-Qa’ida, who claimed responsibility for the death and destruction.

The successful embassy bombings marked a watershed in the evolution of the September 11th plot, persuading Mohammed to truly commit to a terrorist strike in the United States.

CIA’s first victim of al-Qa’ida and Bin Ladin was among the dead in Nairobi, Kenya. Molly Hardy, a senior finance specialist and new grandmother, was killed in the blast.

Molly was a native of Valdosta, Georgia, who moved to Washington when her husband joined the Agency as an operations officer. In 1971 she accompanied him to Vientiane, Laos, where she worked as a contract logistics assistant.

After the couple returned to Washington in 1973, Molly worked as a teller in the CIA Credit Union.

In 1975, she joined the Agency as a payroll clerk and finance assistant. Over the next 23 years, she worked finance and budget issues in all four directorates. Her overseas experience included TDY assignments in Asia, Latin America, and Africa.

During 1990-91, Molly spent a hectic year as a budget officer in the Agency’s Africa division as it experienced one of the most challenging periods in its history. When she was assigned to serve as a regional finance officer in Nairobi, she became responsible for regional offices and took over as the key finance officer.

On the day of the embassy bombing, Molly was in her office, located in the section of the building that bore the brunt of the explosion.

Her last act was to warn her colleagues to take cover in an inner corridor.

For that act of self-sacrifice and heroism, she was awarded the Distinguished Intelligence Cross, the Agency’s highest award for valor. Molly was 51 at the time of her death.

Molly Hardy’s name is etched into the stone at the American Embassy Memorial Garden in Nairobi, Kenya, next to the words: “May the innocent victims of this tragic event rest in the knowledge that it has strengthened our resolve to work for a world in which man is able to live alongside his brother in peace.”

Within days of the August 7, 1998 bombings, two Bin Ladin associates were arrested and charged with the attacks.

CIA personnel at a small station had received word that two of the terrorists were fleeing to their country of operation. They quickly put together an operation that lead to the terrorists’ arrest & imprisonment.

Working closely with the FBI, the operation also culminated with the seizure of computers that contained details of another terrorist plot.

Three months after the Africa bombings, a federal grand jury in New York charged Bin Ladin with orchestrating them and conspiring to commit other acts of terrorism against Americans abroad.

These counts were added to an existing indictment for supporting an ambush that left 18 US soldiers dead in Somalia in 1993.

The criminal complaint remained on the books until June 2011, shortly after the al-Qa’ida mastermind was killed in his hideout in Pakistan. 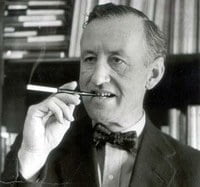 Ian Fleming: The Man Behind the Most Famous Spy | CIA